Summary: Jet racing is a popular sport consisting of two girls riding a modified jet ski in a race battle royale, mono-e-mono. One of the girls is the driver, also known as the “Jetter”, while the other is the Shooter. The driver focuses on navigating the tight waterway while the shooter focuses on gunning down the opposing jet ski. Shots are limited and different parts of the watercraft are weaker than others, so each shot must be taken with the utmost concentration. Rin Namiki leaves her home in the countryside to move to Tokyo and become a Jetter like her mother before her. She teams up with the reluctant Misa Aoi to become an inexperienced an unlikely jet racing team!

Kandagawa Jet Girls wastes no time in showing its true colors. It is an anime that uses sports as an excuse to be as Ecchi as possible. The racing aspect is actually entertaining to watch, and the series provides all the usual sports anime staples, like the announcers that shamelessly explain the rules of the race to the uneducated fans and viewers. However, as intense as the races are, they are quick to bring you out of the moment with explicit moments of fan-service that are so obvious it’s laughable.  The best part of this anime has to be the characters. If you can get past the blatant fan-service, the characters are reminiscent of any other sports anime, where you sometimes end up rooting for both teams after you learn their back story.

You might enjoy this if: You watched Initial D and thought, “This would be great if there were more gratuitous panty shots”.

You might not like it if: You want a sports anime more along the lines of Haikyu, with all the heartfelt moments and none of the sexy stuff.

Note to the Viewer: As you can imagine, there is a Kandagawa Jet Girls video game. It was released on January 16, 2020 for the Playstation 4. It is exactly what you think it is.

AMV – Best of Me by Rochinha.R

(Warning, there is a significant amount of scantily glad girls and fan service in the AMV. It’s pretty indicative of the series as a whole) 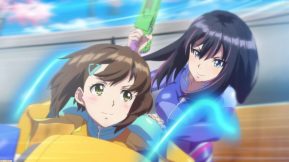