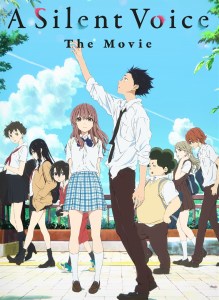 A Silent Voice / Koe no Katachi

Summary: Shouya Ishida is an elementary-age schoolboy with a boredom that he cures by bullying others. He has friends that join in, but he is the ringleader of rude in his circle. Shouya cannot help himself when Shoko Nishimiya, a new girl that happens to be deaf, transfers to his class. Shoko integrates with the class but annoys Shouya, simply because she is different than what he is used to. He bullies her endlessly until her mother complains to the school. She ends up transferring out of the school, Shouya is shunned by his class because of how poorly he treated her, and life is never the same. Shouya begins a journey of redemption for his past mistakes and Shoko must live in a world that seems to be constantly against her, even though she is doing as best she can to make the world a better place.

A Silent Voice is a solid film from start to finish. It does not pull any punches with its storytelling, from the portrayal of bullying to the hopelessness felt when someone has suicidal thoughts. Shouya is an imperfect person that makes mistakes as a kid and must work hard to erase those mistakes. His path to redemption feels real in how it does not come easy. The people he wronged are not quick to forgive and he feels regret the whole way for what he’s done. Shoko is an amazing character dealt a difficult hand in life. She always does her best to maintain a positive attitude in a world that seems against her, but even she breaks down from time to time. It is a great portrayal of the character. Besides that, the animation is top notch, from the characters to the backgrounds. The soundtrack is amazing and adds so much to the film. The song that accompanies the ending is perfection in that scene.

You might enjoy this if: You are ready to be emotionally drained by a powerful story of loneliness, regret, and forgiveness.

You might not like it if: You are emotionally drained as it is and need something lighter, maybe a comedy for a quick pick-me-up.

Similar Anime: Your Name, Fireworks, The Cat Returns, In This Corner of the World, Whisper of the Heart, 5 Centimeters per Second, The Girl Who Leapt Through Time, Mirai, Flavors of Youth

Note to the Viewer: A Silent Voice won Best Animation of the Year in the 26th Japan Movie Critics Awards in 2016, among many others.

A Silent Voice – Koi wo Shita no wa by Aiko

(Warning, the AMV contains some minor spoilers. If you want to go into the movie blind, don’t watch the video. If you want to see a glimpse of the film’s beautiful animation and lovely soundtrack, check it out)