Why the Hell are You Here Teacher!? / Nande Koko ni Sensei ga!?

Genre: Comedy, Ecchi, School, The Name Says it All

Summary: Ichiro is a completely average teenager who always finds himself in inappropriate situations with his teacher, Kana Kojima. Adding to the awkward nature of their encounters is how Kana has a reputation of being overly cruel and mean to her students. If there is any teacher you want to avoid upsetting, it’s the demon Kana. Unfortunately for Ichiro, he is always in the wrong place at the wrong time, constantly crossing paths with the evil teacher. He isn’t even safe outside of school, such as when they run into each other in the laundromat under unfortunate circumstances.

“Why the Hell are You Here Teacher?” is as inappropriate as it comes when referring to anime. This is one of those shows that could not be made into a live-action series due to the content. The situations between Ichiro and Kana are completely over-the-top and ridiculous. If that’s the kind of anime comedy you’re into, this might be the show for you. The fan service is through the roof and totally unbelievable, but that’s Ecchi anime for you.

You might enjoy this if: Absurd, unbelievable Ecchi anime is what you’re looking for.

You might not like it if: You do not want to see the inappropriate mishaps between student and teacher.

Note to the Viewer: An interesting side note is how the manga differs from the anime. The anime features one student and one teacher, Ichiro and Kana. The manga on the other hand features a different pair of student and teacher in each volume. 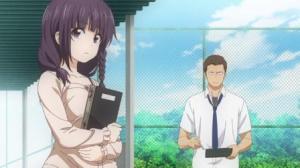