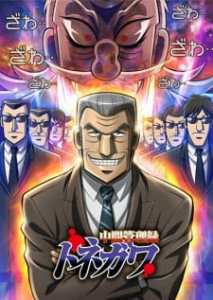 Summary: Mr. Tonegawa is the right-hand man to the president of the Teiai group. The president becomes bored and begins asking Tonegawa to organize various games between the employees to keep him entertained. One week it may be a game of revolutionary Rock, Paper, Scissors, while another week might be a game of human Mahjong. No matter the game, it’s up to Tonegawa and the rest of the subordinates to the keep the president entertained.

Mr. Tonegawa is a spin-off of the Kaiji series and features many of the same characters. Besides Tonegawa, most of them are seen as simple black suits and part of the project team. There are some exceptions, such as the female black suit and the assistant black suit. One of the key elements of the series is the various games they come up with and their ridiculous nature. The Rock, Paper, Scissors (with a twist) is completely over-the-top. Mr. Tonegawa is a nice series in that you don’t have to be familiar with the original Kaiji series to enjoy it. The characters are fun and the stories are enjoyable.

You might enjoy this if: You understand how office life can be tedious and needs a shake-up every once in a while.

You might not like it if: You are not a fan of the “black suit” sub-genre, i.e. Men in Black, The Matrix, Reservoir Dogs, etc.

Note to the Viewer: The Mr. Tonegawa manga has only been in publication since 2015.

AMV – Fight Back by Brandon Anime