Fragglepuss Anime Review 264: That Time I Got Reincarnated as a Slime / Tensei shitara Slime Datta Ken 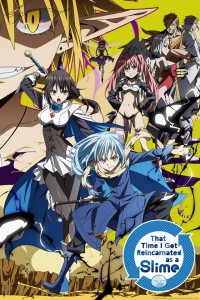 Summary: Satoru Mikami is a 37-year-old human until he is killed by a robber. He wakes up and has been reincarnated as a slime named Rimaru Tempest in a mysterious fantasy world. He retains his knowledge and memories of life as a human but must learn how survive in this new world. He uses a newfound optimism to discover new abilities and make the best of his life as a slime!

This has to be the best slime anime of the year. The show gets right into it with the slime being confused about how he got there and why he’s a slime, but he rolls with it and starts learning the rules of the world and the rules of the slime. It cracks me up how he starts out so weak but with an unbridled optimism that propels him to become one of the most powerful slime there is. I don’t think I would be as ready to take on the world if I randomly woke up as slime one day. It’s fun to watch Rimaru discover his abilities and learn new ones as well. He meets countless characters on his travels, including dragons, direwolves, and goblins. It’s kind of freaky because I was watching the Goblin Slayer anime around the same time as the slime anime, and the goblins in the two series are wildly different. You would think goblins would be consistent across all mediums, but that is just not the case. I wonder what the Goblin Slayer would do if he came across the goblins in the slime anime. Surely he wouldn’t slaughter them all…Eh, who am I kidding, I’m sure he would. He is the Goblin Slayer after all.

You might enjoy this if: You feel a special bond with slime. Ever since you had a difficult time killing them in Dragon Warrior, you have felt a connection that remains unbroken to this day. Maybe you have a deep-down desire to one day be reincarnated as a slime with magical abilities, or maybe you just want to watch a fun fantasy anime.

Similar Series: Overlord, Is It Wrong to Try to Pick Up Girls in a Dungeon, Konosuba, No Game No Life, The Devil is a Part-Timer, Re: Zero -Starting Life in Another World-

Note to the Viewer: The light novel of Slime has been increasing in popularity ever since it was originally published in 2014.

That Time I Got Reincarnated as a Slime Opening

AMV – Best of Me by Saknosuke AMVs 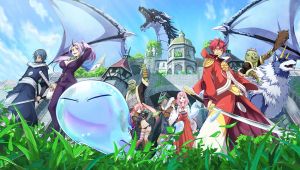 1 Response to Fragglepuss Anime Review 264: That Time I Got Reincarnated as a Slime / Tensei shitara Slime Datta Ken