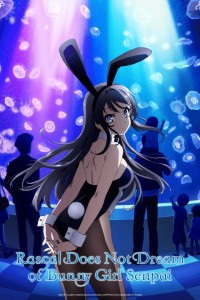 Summary: Mai Sakurajima is a teenage actress. Why is nobody noticing her as she walks through the high school library in a bunny outfit? That’s what Sakuta Azusagawa wonders as he watches the famous actress casually passing through the school, seemingly unnoticed. Mai and Sakuta learn of an unusual set of circumstances that have led to this point and caused Mai to become mostly forgotten by the general population. It is up to the two of them to figure out a solution before it is too late!

This Rascal series is difficult to explain because the title misleads and causes you to be generally confused as you start watching. The series is more than a random bunny girl walking around town. It is a mystery wrapped in an enigma wrapped in a mystery. The series covers a few specific events that each pan out over a few episodes, each one more traumatic than the last. Over the course of the series several characters are introduced that play a pivotal role in Mai and Sakuta’s progression. The two protagonists start off as basic characters without much to define them, but by the end of the season they have gone through intense experiences to make them complex and hardened.

You might enjoy this if: You have time to commit to paying attention to an entire series. This isn’t one you can put on in the background while you look at your phone and do something else. If you do that, you will be lost by the end of the first episode.

You might not like it if: You see the picture of Mai in a bunny girl outfit and hope the entire series is a bunny cosplay fest.

Similar Anime: Charlotte, Your Name, The Girl who Leapt Through Time, Golden Time, Orange, Another, Re: Zero, Erased, ReLIFE, One Week Friends

Note to the Viewer: Rascal is animated by Studio CloverWorks, a new studio that has also animated: Darling in the FranXX, Persona 5: The Animation, DAKAICHI, The Promised Neverland, and Ace Attorney season 2. They are new but have been really going at it hard.

Rascal Does Not Dream of Bunny Girl Senpai Opening