Summary: Nyanbo are creatures with a cat-like appearance with square bodies. Come to think of it, everything on them is square, from their head to their arms and legs. They came to Earth from outer space and need to repair their ship if they want to leave. Their only problem is how easily distracted they get. One day Mike will be proving he’s not lazy and another day they are hanging out with the Nyanbo Angels. The Nyanbo we know about are:

Nyanbo is something else. The square cat-like creatures are adorable. They are the only animated part of the show. They travel around on a real background throughout the city and around the house.

You might enjoy this if: You want to watch an anime with the kids.

You might not like it if: You want something with a little more substance than square cats.

Note to the Viewer: It’s easy to assume the anime was modeled after figurines. That was the case. The original figures were created in 2015, followed by different sizes in 2016 and 2017. 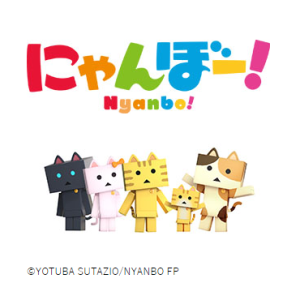