Fragglepuss Anime Review 250: My Neighbors the Yamadas / Tonari no Yamada-kun

Posted on December 6, 2018 by Fragglepuss 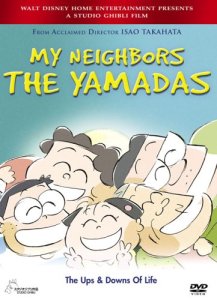 My Neighbors the Yamadas / Tonari no Yamada-kun

The Yamadas go through day-to-day life with relatable situations that affect all of us. One day they are arguing over who gets control of the TV remote and another day they are frustrated with daily tasks. Despite the arguments among the family, they love each other, and it shows. They all have their flaws, but they overlook the flaws when it matters most.

My Neighbors the Yamadas is directed by Isao Takahata, who you may know from such films as: Grave of the Fireflies, Pom Poko, and The Tale of Princess Kaguya. If you have seen any of Takahata’s other works, you know he often utilizes a unique animation style. That’s also the case in the Yamadas. The film is presented in a stylized comic strip aesthetic with simple animation and a lack of backgrounds. The English dub follows suit with other Ghiblis in how a stellar voice cast was brought on. The cast includes: James Belushi, Molly Shannon, Daryl Sabara, Liliana Mumy, Tress MacNeille, and David Ogden Stiers.

You might enjoy this if: You want a Ghibli film that’s like nothing else you have ever seen.

You might not like it if: The change in animation is too much for you. The film is simple and fun, but it’s not for everyone.

Note to the Viewer: Takahata wanted the film to use watercolor pictures rather than traditional cel pictures. To achieve that, digital technology was used, making My Neighbors the Yamadas the first Studio Ghibli film to have animation drawings painted entirely on computers.

My Neighbors the Yamadas Official Trailer

1 Response to Fragglepuss Anime Review 250: My Neighbors the Yamadas / Tonari no Yamada-kun