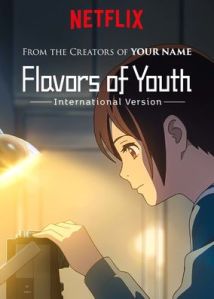 Summary: Flavors of Youth is an anthology film split into three segments, taking place in three different cities. Each segment explores the simple joys of life and different types of love. The first is a memory of a bowl of steaming noodles, the second a fading beauty finding her way, and the third a bittersweet first love. Li Haoling, Jiaoshou Yi Xiaoxing, and Yoshitaka Takeuchi each direct one of the segments.

Flavors of Youth goes by fast. The short 76-minute run time is split into even shorter parts, so every part is over before you know it. Each part has its strengths and every part is compelling in its own way. The animation is beautiful, from the intricate backgrounds to the stunning food that looks good enough to jump out of the screen and be eaten. The soundtrack is outstanding, bringing out the emotion in various scenes.

CoMix Wave Films is the production company behind Flavors of Youth. They have released many quality films, including all the “Similar Films” listed below.

You might enjoy this if: You need to kickstart your emotions.

You might not like it if: You want your romance stories to always have a happy ending.

Similar Films: She and Her Cat, 5 Centimeters per Second, Children Who Chase Lost Voices, The Garden of Words, Your Name

Note to the Viewer: There’s a scene after the credits so make sure you watch all the way to the end.

(I really enjoy this ending song. I must be a sucker for CoMix Wave endings because I feel the same way about the Your Name ending, such fitting ends to the films. A perfect way to sit back and think about everything you just watched)