Summary: A black shadow plagues the city of Oedo by night. Her prey never escapes her! She is the elusive Phantom Thief Reinya! By day she is a mild-mannered convenience store clerk going by the name Reinya-chan, but after the sun sets she is the unrecognizable Phantom Thief Reinya, stealing the country’s most valuable treasures with her mouse partner Chutaro. It’s up to the inspector, policewoman, and detective to catch the mysterious burglar!

Phantom Thief Reinya is a silly show that can be binged in less than an hour. The short episodes are full of jokes and slapstick humor. There are not many characters, but the few that get screen time are enjoyable to watch. Despite the short run time of the series you get to know the characters surprisingly well. I even like the mouse partner Chutaro, especially when he would get hit and turn into a tennis ball. I’m a sucker for live-action footage being selectively added to animation for comedic purposes, and Phantom Thief used the right amount of live-action cutaways at just the right times.

You might enjoy this if: You want fun, quick, and bright. If you have a short attention span, Phantom Thief will be perfect for you!

You might not like it if: You want story and detailed animation. Phantom Thief is clearly about the quick jokes and the fast pace, not the developing plot.

Note to the Viewer: Phantom Thief Reinya is produced by Kadokawa Pictures Japan, who has produced many memorable anime: Steins;Gate, Deadman Wonderland, Nichijou, Full Metal Panic, and Sekko Boys to name a few. 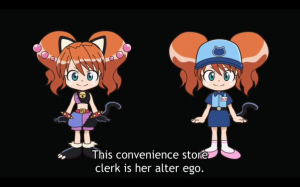