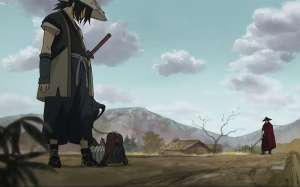 Summary: The time is during the Sengoku era. The place is Japan. Kotarou and his dog Tobimaru steal from others to survive. They are constantly on the move, running from assassins sent by China’s Ming Dynasty. During their travels they run into the Ronin Nanashi who has taken refuge in a rundown temple. A fortuitous situation occurs when Nanashi helps Kotarou, who was poisoned. After recovering, Kotarou offers Nanashi a gem in exchange for bodyguard services. The three travelers embark on a danger-filled journey to make it past the Ming Dynasty’s warriors.

Sword of the Stranger is beautifully done. The story is well told with its mix of character building and action scenes. The battle sequences are stunning, especially the climax at the end of the film. I was hesitant at the start, especially when I realized it was about going on a journey, but it told its story well and left me highly satisfied. The animation and soundtrack set the scene and suck you into the story, adding to it and making it feel like you’re in historical Japan.

The director, Masahiro Ando, is not well known for his works, but has worked on a lot of other anime. He worked in the animation department in Ghost in the Shell, Cowboy Bebop, Fullmetal Alchemist, and Neon Genesis Evangelion.

You might enjoy this if: A well-told journey is just what you’re looking for.

You might not like it if: You are averse to violence and bloodshed. There’s a decent amount of anime-style blood throughout.

AMV – Devil Inside by DabFr

(Warning, the AMV contains spoilers. They won’t make sense though if you haven’t seen the film) 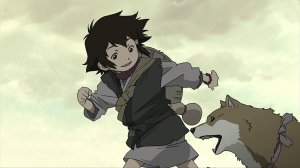