Summary: Luluco is an eccentric middle schooler who just wants to be normal. Unfortunately, she lives in an unusual city, Ogikubo, an intergalactic melting pot of humans and aliens, the only Space Immigration Zone on Earth. Luluco’s father experiences an unfortunate freezing accident, resulting in Luluco’s recruitment to the Space Patrol. Her life may never be normal again…

Space Patrol Luluco is as bizarre as it sounds. The short-form episodes provide fast-paced entertainment without a lot of plot. The focus is on the characters and their daily experiences in the space patrol. The series is made by Studio Trigger, creators of: Kill la Kill, Little Witch Academia, and Ninja Slayer From Animation. The animation style prominently shows with its bright colors and thick outlines. The ending is fun as well, adding to the strange premise of the series.

You might enjoy this if: You want a break from serious and are ready for hectic nonsense. Imagine a full anime series of Mako (from Kill la Kill) monologues. It’s a fun watch when you sit and enjoy an episode or two at a time.

You might not like it if: You have just come off a Studio Ghibli high and are expecting quality storytelling with beautiful animation and breathtaking backgrounds.

Note to the Viewer: The Space Patrol manga was written by Hiroyuki Imaishi, who also wrote and directed the anime series. Imaishi co-founded Studio Trigger after leaving Gainax in 2011. 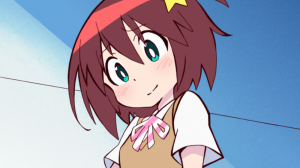