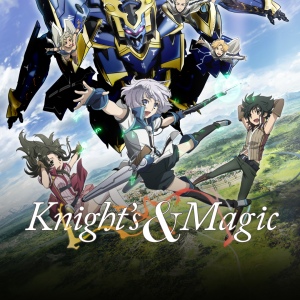 Summary: Kurata is an otaku with an unbridled passion for mechs. He is a genius programmer that spends his free time building mech models. His passion is so strong that his two-bedroom apartment has one room for him and one for his models. On a rainy day like any other, he dies, reincarnating in another world as Ernesti Echevarria. This new universe is everything he’s ever dreamed of, with mechs not only existing, but being a part of everyday life. Ernesti quickly adjusts to his new reality and strives to attain his new goal, becoming a part of the Knight Runners that pilot the Silhouette Knight machines.

Knight’s and Magic differs from other mech anime in several ways. It goes into incredible detail with the machines being built, from their efficiency upgrades to entirely new mechanisms. The series focuses on mech building rather than piloting or fighting. It is set in a medieval setting with giant mechs, so that’s different. There’s still some fighting against baddies and robots, but the focus is elsewhere. On another note, the opening and closing credits are enjoyable and appropriate.

You might enjoy this if: You are a mech-building otaku. You will be all about the deep dives into mech mechanics.

You might not like it if: You are tired of the “being transported into another dimension” trope. My one minor beef with this series is how the protagonist is transported into a new dimension in the first episode and then it’s like the original world doesn’t even exist anymore.

Similar Series: Overlord, The Irregular at Magic High School, Log Horizon, Is It Wrong to Try to Pick Up Girls in a Dungeon, Konosuba: God’s Blessing on This Wonderful World

Note to the Viewer: Knight’s & Magic began as a web novel before being picked up for print publication. The anime adaptation was created by studio 8-Bit, creators of Absolute Duo, Comet Lucifer, and Rewrite. 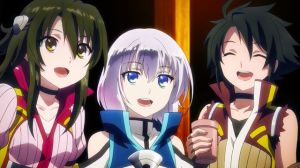