Posted on September 8, 2017 by Fragglepuss

Summary: Amano Keita is a seemingly normal high school boy who happens to be a passionate gamer. He may not be the best at any game, but he loves to play regardless. Keita’s life takes an unexpected turn when he is approached by the beautiful and perfect Karen Tendou, president of the video game club. Tendou is attempting to recruit Keita into the video game club, which is as dysfunctional as can be with each member being quirkier than the last! Will Keita join the club? What kind of hijinks will he get into while being recruited?

Gamers begins as a reference heavy show but turns into much more. Comedic romance hits full force as character A likes character B but dates character C because B is dating character D even though B is only dating D to appear more attractive to A. To complicate matters further, C likes D but cannot pursue since D is in a relationship with B. Oh, and D secretly likes C but cannot confess their love. Enter character E who is trying to get all the proper relationships started but secretly likes B as well. Confused yet? Don’t worry, it will all make sense as you watch the series and it’s fun to watch everything go down. In one of the episodes they are all playing Love Love Game of Half-Life (The Game of Life) and I was cracking up.

The various game references are enjoyable, especially since all manner of genres are covered. The opening intro alone covers a whole handful. The characters are entertaining with the different games they prefer and their complaints about other genres they don’t understand. I also enjoyed seeing the characters visit several Japanese arcades.

You might enjoy this if: You are a gamer or are seeking to understand the life of a Japanese gamer.

Similar Series: D-Frag, Saekano: How to Raise a Boring Girlfriend, This Art Club Has a Problem, No Game No Life, Orange

Note to the Viewer: The series is produced by Pine Jam, an animation studio founded in 2015. Gamers is only the second anime produced by the studio. 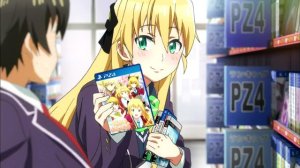