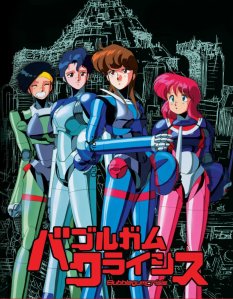 Genre: Action, Adventure, Mecha, Sci-Fi, Future seen from the eyes of the 1980s

Summary: We get started in the year 2032, about seven years after a crushing earthquake destroyed Japan, leaving Tokyo split in twain. MegaTokyo rises as a result, thanks in part to Genom Corp. As is usually the case in this type of scenario, Genom’s biomech creatures go rogue. The creatures, Boomers, prove too tough for the crummy police force so desperation sets in. The police call The Knight Sabers, a group of four women with varied backgrounds that banded together as mercenaries to fight using their powered exoskeletons.

There’s a lot to love about Bubblegum Crisis, beginning with the opening sequence and continuing through every unique song in the soundtrack. I highly recommend checking out the music videos attached to the series. The mech is another enjoyable aspect, especially the four main Bubblegummers and their suits. The vibrant colors and bright view of MegaTokyo was enough to keep me entertained for some time. The story is not that deep, but the series thrives on action and thrills that deliver in pretty much every episode.

You might enjoy this if: You’re ready for an action-packed mech ride full of good times and good tunes!

Similar Series: Akira, Ghost in the Shell, Metropolis, Nausicaä of the Valley of the Wind

Note to the Viewer: Bubblegum Crisis has hit one production pothole after another. The series was planned for 13 episodes, but was cut down to eight. Even with that, the episodes were released over a span of several years. A live-action film was announced in 2009 but nothing came of that as well. On a high note, Bubblegum Crisis 2040 was released in 1998 as a 26-episode series, being a reboot of the original.