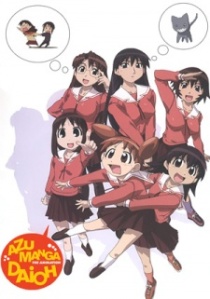 Summary: Chiyo Mihama is a quirky 10-year-old genius that’s skipped a few grades and is in high school. That may sound strange, but even crazier is she’s not even the biggest oddball in the class! Sakaki is tall, athletic, and the envy of all with her soft-spoken personality and obsession with cats. Best friends Tomo and Koyomi are a spirited and enthusiastic pair, but they’re not so bright. Ayumu is a transfer student from Osaka, bringing an unfamiliar accent mixed with traditions the other girls have never encountered. Even their teacher, Yukari Tanizaki, fits in by unknowingly encouraging their antics. Who knows what this group will be up to next?

Azumanga Daioh is a classic form of school anime in the way its episodes are structured. Except for the rare exception, the setting is always in the school and more specifically the classroom. However, sometimes they venture to the outside of the school for gym and whatnot. It’s fun to watch the shenanigans the girls get into, especially when it comes back to get them. It’s never anything too crazy and truly is a good take on the slice of life genre.

You might enjoy this if: You are ready to look at Japanese culture and more specifically Japanese humor. Some of the jokes and situations are funny while others had me scratching my head thinking, “Are they attempting a joke here?”. Maybe it’s funny and I’m the fool though.

You might not like it if: You want a series with an ongoing plot and deep characters. Not a lot of that going on here.

Note to the Viewer: You’re not alone in wondering the significance of the name “Azumanga Daioh”. Azumanga is a combination of the creator’s name “Azuma” and “manga”. Daioh comes from the original source that published the series, “Dengeki Daioh”.