Posted on February 2, 2017 by Fragglepuss 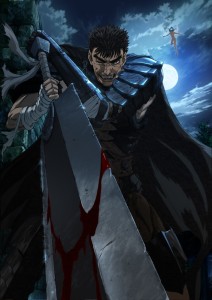 Summary: The Berserk anime series has finally continued from where it left off in 1997! Guts has been branded to be a sacrifice to demons but refuses to give up. He lives in a daily struggle fighting against demons, both figuratively and literally. He travels around the medieval landscape in hopes of saving the few friends he has left, as well as using his giant sword to slay the demons that torment him. As Guts journeys he encounters unlikely allies that join his quest, including a small elf named Puck that won’t leave his side.

The original 1997 Berserk series was one of the first anime I ever watched and left me with a craving for more. The cliffhanger ending left such an impact that I started reading the manga to find out what happened after the unexpected finish of the anime. I am somewhat biased in this review because of my love for the series, but I am just glad we finally got more Berserk on the screen. The 3DCG animation was distracting at times, but after a few episodes I was used to it. The dark and gritty story cut out some parts of the manga, but I expected as much. Guts is still swinging his giant sword around, demons are being sliced in half, and his ragtag group of misfits is still being assembled, so all the important pieces of the story are coming together.

You might enjoy this if: You are like me and have been waiting for this since the late 1990s. If you enjoyed Claymore and Overlord, Berserk will likely interest you.

You might not like it if: Mature content in the form of blood and gore is not for you. This series has always been big into unapologetic death scenes.

Note to the Viewer: Kentaro Miura, the author of the original manga, is the executive supervisor of the anime.

AMV – Send Up the World by Slayer AMV

(Warning, the AMV contains some minor spoilers and a fair amount of violence) 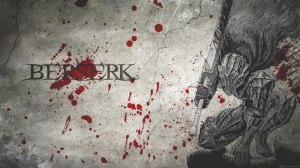