Fragglepuss Anime Review 141: Grave of the Fireflies / Hotaru no Haka

Posted on October 6, 2016 by Fragglepuss

Grave of the Fireflies / Hotaru no Haka

Summary: Seita and Setsuko are siblings living in Japan near the end of World War II. Seita is doing his best to take care of young Setsuko, but it is becoming increasingly difficult as the country is constantly being bombed. Help is scarce and nowhere is safe with the frequent air raids. At least the siblings have each other.

Grave of the Fireflies is directed by Studio Ghibli co-founder Isao Takahata, director of Pom Poko and The Tale of Princess Kaguya. It is ranked #60 on IMDB’s Top Rated Movies, which refers to all movies, not just anime. The only anime ranked higher is Spirited Away. The film is based on a semi-autobiographical novel of the same name by Akiyuki Nosaka. It provides a gritty and believable account of the end of World War II from the Japanese perspective. The story is depressing and emotionally intense, but rightfully so. I appreciate being able to gain some understanding from another perspective regarding the global event that impacted history so significantly.

Fireflies does not follow the Studio Ghibli style of using big name actors for the English dub, which is fitting due to the nature of the film. The use of well recognized acting voices would be distracting. The animation is fitting for the time of its creation. It’s interesting to note that most of the illustration outlines are in brown instead of black to give the film a softer feel.

You might enjoy this if: You are ready for an amazing film that will leave you in tears. Grave of the Fireflies is not just good anime, it is a stunning film that everybody should see.

You might not like it if: You do not want to see World War II from the eyes of Japanese civilians.

Note to the Viewer: Grave of the Fireflies was released in theaters as a double feature with My Neighbor Totoro. The release was done out of convenience even though the films vary widely in their tone and message.

AMV – Safe and Sound by Nightwingm13

(Warning, the AMV contains spoilers so don’t watch it before seeing the actual film) 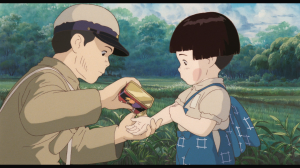 6 Responses to Fragglepuss Anime Review 141: Grave of the Fireflies / Hotaru no Haka