Summary: Kazuma Satou is a seemingly normal high school student and hardcore gamer. He is walking home with a new game in hand when he sees a girl in trouble. He decides to save her from being run over, which saves her life but forfeits his. He reawakens in the afterlife, greeted by a goddess named Aqua, who guides youth whose lives ended sooner than necessary. Aqua offers Kazuma a choice: to go to boring heaven where nothing exciting ever happens, or to be sent to another world to defeat the Demon King. As a bonus, if Kazuma joins the world containing the Demon King, he can choose to take any one thing with him. It could be a piece of equipment, an ability, or anything else for that matter. As you can imagine, Kazuma chooses to start his life in a new world, which is quite literally an RPG.

Konosuba is a heap of fun right from the start. I won’t spoil the jokes, but I’ll tell you it turns out to be hilarious how he died! His entire journey from Earth to the new world is great and it keeps going strong from there. The world of the Demon King is relatable if you have ever played an RPG, and let’s face it, I’m sure all of us have. Kazuma has to complete quests to level up and since he wasn’t strong in the real world, he’s not strong in the new world and has a difficult time getting anything done. It’s a good thing he’s able to team up with other adventurers to form a full ragtag party of misfits.

You might enjoy this if: You’ve ever played an RPG and wanted to be magically whisked away into that type of fantasy world. On the surface Konosuba is similar to shows like Sword Art Online and Re: Zero, but you will quickly learn it has its own identity.

Note to the Viewer: In case you’re not familiar with the term, NEET means: Not in Education, Employment, or Training. 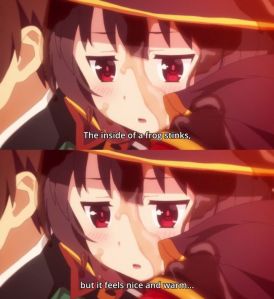