Summary: Porco Rosso is a veteran World War I flying ace turned freelance bounty hunter. Porco upsets a gang of sea pirates when he disrupts their kidnapping and the pirates hire the American pilot Curtis to help them be rid of Porco once and for all. When Porco and Curtis are not in the air they are spending their time with Gina, a woman that has a long history with pilots. I should also mention that Porco has been cursed by a mysterious spell that has left him with pig features.

Directed by the legendary Hayao Miyazaki, Porco Rosso is a fantastic film through and through. Miyazaki uses flight as a major part of the story, which is a recurring theme for him. Unlike many of his films, Porco Rosso uses specific locations and historical references, making it a more realistic film (except for the Pig Man of course). The music is composed by Joe Hisaishi, who also did an amazing job. The English dub is well done and features the voices of: Michael Keaton, Cary Elwes, Susan Egan, David Ogden Stiers, and Kimberly Williams-Paisley.

Porco Rosso is a fun watch that combines an appropriate amount of drama and comedy. It is a Studio Ghibli film that I can watch over and over. The characters are entertaining and diverse, despite being mainly pilots or otherwise plane-related people. My favorite character is Fio, the 17-year-old female mechanic that has a passion for planes that is unmatched. A few of the scenes in Porco Rosso rank up there in the top of all Ghibli films for me, like the scene where Piccolo’s extended family is rebuilding Porco’s plane. The last bit I will mention is how much I appreciate the lack of dialogue at certain points in the film. Miyazaki employs this technique in many of his films. The use of silence expresses more emotion and says more than any dialogue would.

You might enjoy this if: You want to watch a film with a great storytelling that is appropriate for all ages.

Note to the Viewer: Porco Rosso was originally planned to be an in-flight film for Japan Airlines. Also, there’s a “Ghibli” written on an engine at one point in the film, which is both the name of the studio and the name of a light reconnaissance aircraft. 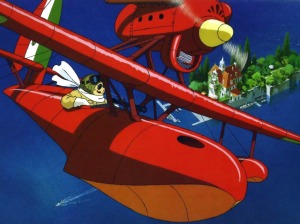