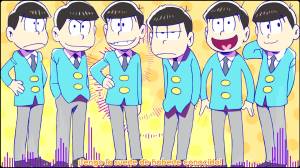 Summary: The Matsuno household has six naughty and mischievous sons (who are sextuplets), led by the eldest Osomatsu. They were grade schoolers back in the Shouwa period, but despite still living in the same old household, the street view as well as the life style of modern day society have changed drastically. The six brothers are constantly dealing with everyday problems that they make into a big deal, such as how to split the pastries or when they must plead their case to their mother for her financial support.

Mr. Osomatsu’s episodes are full-length but consist of several skits within each episode. There is not much of a story so you can start watching at almost any point. The six brothers are the focus of the series and even though they look similar (they are sextuplets after all) they all possess a unique personality. The voice actors did a good job of making the Osomatsu brothers sound different which helped in distinguishing each brother. The humor is hit or miss which is likely due to cultural differences. It reminded me of Hozuki no Reitetsu, where there are a lot of jokes based on the Japanese culture. The animation of Osomatsu is new and refreshing. The color palettes are something you don’t see in many anime.

You might enjoy this if: You are an otaku looking for a unique anime that does not take itself too seriously and parodies the tropes of other anime. You’ll probably enjoy Osomatsu if you’re a sucker for anime nostalgia.

You might not like it if: You are looking for a show with substance and plot. Osomatsu is all about the quick skits, kind of like an anime version of Saturday Night Live, but using the same characters repeatedly.

Note to the Viewer: Osomatsu-san is a new series based on Osomatsu-kun, a series that originally aired in the 1960s. The original 1960s manga was written by Fujio Akatsuka. The new series began airing in October 2015 to celebrate Akatsuka’s 80th birthday. Another note, the first episode of the series has been pulled from streaming sites due to containing too many parodies. 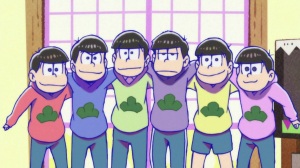