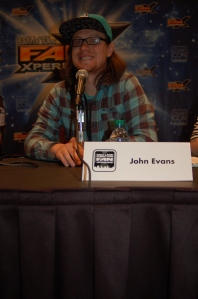 An AMV is an Anime Music Video. AMVs are fan-made music videos of one or more anime set to some sort of audio track. They are not official music videos released by musicians. AMVs are generally categorized by genre, with categories such as: Action, Drama, Theatric, Fun, Dance, Romance, Comedy, Parody, Local and Category X. AMVs are a big part of virtually every anime convention. From my experience they are one of the most popular features of any anime con. At Anime Expo they even have a dedicated room that plays AMVs through the entire convention with themed block, such as: All the Feels, Comedy on the Edge, Femmes with Firearms, Mortal Combat, We Got the Beat and AMV Crossovers.

The first AMV was created in 1982 by Jim Kaposztas when he hooked up two VCRs and edited the most violent scenes of Star Blazers to “All You Need Is Love” by the Beatles. Kaposztas was inspired by MTV and the start of the music video era. Although anime is used as the visual for AMVs, their popularity lies with the United States and other Western fans.

The AMV Competition is a staple for most anime conventions in the United States. AMVs are submitted by a deadline before the convention and organizers choose the top videos to present. AMVs are categorized with awards being presented after judging occurs. Judging is based on many aspects of the video. For example, AMVs are based on edited material which means transitions, beat detection, special effects, lip-syncing and other technical qualities will be judged. The pairing of animation to music can be important, meaning how well the song fits the theme of the anime. A comedy AMV can be partially judged based on its use of humor. An AMV can be judged on how well it tells a story, particularly in the case of drama or romance. Action AMVs can be judged on an appropriate use of action combined with fitting music. AMV competitions generally award the winner of each category. Another award often presented is “Viewer’s Choice”, the result of the audience voting for their favorite AMV. The last and most prized award is “Best in Show”, which is self-explanatory.

I enjoy AMVs for all sorts of reasons. They are a fun and quick way to find out more about an anime you’re interested in, kind of like watching a trailer. It’s also an easy way to discover new anime. If you are watching an AMV you may see an anime you’re not familiar with that piques your interest. That’s how I found out about Usagi Drop.

Here’s the AMV I first saw at an AMV competition. It caused me to immediately look up Usagi Drop and watch the series as soon as possible. I appreciate the way an entire story is told in only a few minutes. The music is also a fitting choice. The AMV is: Ivy Bridge by Shin

This AMV of Redline is another I was first exposed to at a convention and was intrigued by the bold animation. I also enjoy it because the song choice fits the video perfectly even though I probably wouldn’t listen to the song otherwise. The AMV is: Ride or Die by Kyssifur

Another anime I started watching due to an AMV was based on Fullmetal Alchemist. The AMV covers most of the series in an emotional way that left me with no choice but to start watching. Once again, I would not listen to the song otherwise, but it fits the tone of the AMV well. The AMV is: Al’s Time of Dying by Bronze Phoenix

The last one I’ll mention uses The Master of Killing Time as the anime. I thought the AMV was hilarious so I had to find out more about this silly show. The AMV is: My Neighbor Figaro-Kun by Nicolio1313

AMVs are great because you can search for them based on a song you like, your favorite group or one of your favorite anime. Chances are there is an AMV you’ll discover based on any of those searches. I really like Madoka Magica and found this fantastic video. The editing is spot on. The AMV is: The Nightmagi Cometh by Rozzok

To the Forest of Firefly Lights has a wonderful AMV that makes you relive the high amount of emotion felt while watching the film. Warning, this AMV is spoiler heavy, so proceed with caution if you have not seen the movie. I agree with the song choice and the lyrics fit the video. The AMV is: You Can Be King Again by youlazybum

It is also entertaining to watch an AMV that sets a different tone to an anime. For example, an AMV can be made about a horror anime that turns it into a comedy or vice versa. This Dragon Ball Z AMV uses “Sexy and I Know It” to put the anime in a new light. The AMV is: Sorry for being Hercule, Sincerely Mr. Satan by l33tmeatwad

Compilation AMVs are perhaps the best example of changing the tone of an anime. Compilation series like AMV Hell and AMV Salad are perfect for anyone with a short attention span looking to laugh. Comedy clips made by various editors, about 30 seconds in length, are pieced together into a presentation that lasts about an hour. The compilations are more suited for the Otaku (Anime Geek) than the anime newbie. Here’s AMV Hell 3 – The Motion Picture

My favorite AMV studio is Pixel Blended Studios (PBS). Editors in PBS made the Ivy Bridge AMV I linked above. Another AMV made by PBS is Ultra Fighting Bros by irriadin and Daramue. I love the way this AMV combines fighters from multiple anime, giving the appearance they’re all part of the same video game. It’s a creative idea carried out successfully.

Another way multiple anime are combined to look like they’re part of the same world is through Dance AMVs, which are impressive in the beat detection department. This genre is an absolute joy in the way they make it look like the characters from various anime are dancing along with the music. One of my favorites is: Mmm Mmm Yeah Yeah! By 某科学的cc君

Here’s another Dance AMV: Shake it off by snowdragon25

In case those two aren’t enough for you, here is a third Dance AMV: Uptown Funk by JessD AMVs

To finish it off here is a Full Metal Panic comedy AMV that gets me every time, [Classified] by drgngrltonbo

AMVs are a fun and exciting new way to experience anime. Individuals that make them are creative and skilled at what they do. I’m glad people take the time to create and edit AMVs because it allows me to not only discover new anime but also experience some of my favorite anime in a different way.

1 Response to The Fragglepuss Introduction to Anime Music Videos (AMVs)