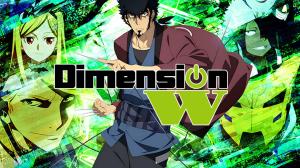 Summary: The existence of a fourth dimensional axis beyond X, Y, and Z, Dimension W, was proved in the year 2036. Inter-dimensional electromagnetic induction devices known as coils were developed to draw out the seemingly inexhaustible supply of energy that exists in Dimension W. Giant towers built in sixty locations around the world stabilize the energy from Dimension W and now supply power to the entire world. The system built by New Tesla Energy and governments around the world is called the “world system” and has changed civilized society from its very core.

Fast-forward to the year 2072 and the world is full of powerful illegal coils. Kyoma is a Collector whose job is to find and retrieve these illegal coils. All is fine in Kyoma’s life until he encounters the unique coil android Mira. They are quite the unusual pair with Kyoma hating coil technology in all its forms, and Mira being a lovable humanoid-like android based on coil technology.

Dimension W is full of questions regarding a future with a questionable energy source. Is it really an inexhaustible energy without consequences? How does the energy work? Why does Kyoma loathe the technology? The futuristic world is intriguing enough to watch at least a few episodes. By that point you’ll probably be curious about the back story of Kyoma and Mira, as well as the history of coils, so it’s worth finishing the season.

You might enjoy this if: You dream of futuristic dystopias. Dimension W reminds me of Psycho-Pass in the way that society seems fine at first glance but below the surface is a frenzy of activity.

You might not like it if: You want your sci-fi to be off the wall and full of laughs.

Note to the Viewer: Watch for the flashbacks to occur. Some of them come out of nowhere, including at the beginning of an episode. If you’re not paying attention you will get really confused as to what’s going on.