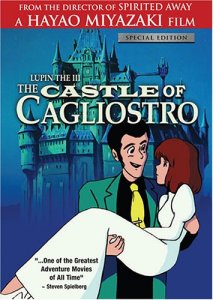 Summary: Lupin III and his partner Jigen have just completed their biggest heist yet, filling their entire car with money from a casino! Unfortunately for the thieves, the money is all counterfeit. Their search for the source of the counterfeiter leads them to the Castle of Cagliostro, which begins their adventure.

The Castle of Cagliostro is the theatrical directorial debut of acclaimed Studio Ghibli director Hayao Miyazaki. He directed Cagliostro years before he co-founded Studio Ghibli. Miyazaki’s style can be seen in the film, from the beautiful depiction of the scenery to the realistic portrayal of the characters.

The story is enjoyable and the adventure does not seem to drag on. Several characters are introduced, each with their own unique identity and purpose. Some are lovable while others are the type you love to hate. One of the best aspects of the characters is that they possess the classic Miyazaki characteristic of understanding why they act the way they do. The heroes are imperfect and the villains are evil, but somewhat able to justify their evil deeds.

Several aspects of the film are reminiscent of the earlier days of anime, such as the animation and the sound effects. The classic laser-like sound effects are heard a few times and the animation shows signs that it was released in the late 70s. I enjoy the Cagliostro animation a great deal, especially with it being Miyazaki’s style, but it is interesting to see how much animation has changed in the past few decades.

Cagliostro does a great job at being a stand-alone film for Lupin III, especially since it is the second Lupin film and has an anime as its predecessor as well. There were a few times though that I wondered if I had missed something because of the familiarity Lupin had with a few characters. Turns out I had not missed anything in Cagliostro because most of the Lupin characters had been introduced in earlier features.

You might enjoy this if: You are ready for a fun adventure. If you like Indiana Jones or James Bond, Lupin is right for you. If you want to see Hayao Miyazaki’s roots, The Castle of Cagliostro is the place to start.

You might not like it if: You cannot handle older animation. The film is wonderful, but if you cannot look past the older animation style, you will probably have a difficult time with Cagliostro.

Note to the Viewer: Several versions of Cagliostro have been released over the years. The original theatrical release in Japan came with an original set of subtitles. The film was released in the U.S. in 1992 with a new set of subtitles and a dub that did not follow the original Japanese very well. For example, Lupin is referred to as “the Wolf”. In 2000 a re-release of the film in the U.S. issued a new dub that followed the original Japanese better than the 1992 version. It was also accompanied by some new subtitles. In 2015 the film was once again re-released, this time with an additional option of a “family friendly” dub with reduced profanity. It also includes a “commentary with Reed Nelson” audio option. I personally prefer the 2000 version if you are going to watch it dubbed.

The Castle of Cagliostro Official Trailer

(The trailer is so cheesy but I love it!) 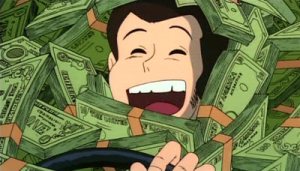