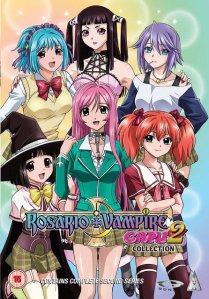 Summary: A year has passed since Tsukune was sent to the Youkai academy, and things are crazier than ever. Just as Tsukune thought he had gotten used to the school, new challenges arrive in the form of students and teachers. The second season begins with the usual crew arriving on their first day of school after summer break. Tsukune and the crew quickly get caught in another wild scheme, and the craziness continues through the entire year!

The second season of Rosario is fairly similar to the first season. The core group of characters is present in the new season, with the addition of a few new ones. The main focus is still on comedy and the fan-service is stronger than ever. Ko, the narrating bat, is still around to break the fourth wall and let you know how long each episode’s showdown lasted. It seems the creators pushed the series to the next level with the second season, from the fan-service to the head-shaking sexual innuendos.

You might enjoy this if: You enjoyed the first season of Rosario. You’re getting more of the same in the second season. If you enjoyed Highschool of the Dead, Actually I Am, or Sekirei, check out Rosario + Vampire. Start with the first season though…obviously.

Note to the Viewer: You’ll be able to see the difference in Capu2 right off the “bat”. Get it, bat, because there’s a talking bat in the show…Whatever, I stand by my joke. Anyway, the new opening is over the top but will give you an idea of the kind of fan service you’re in for this season.

(Warning, the opening contains fan service. You have been warned)

Here’s my review of Rosario + Vampire season one