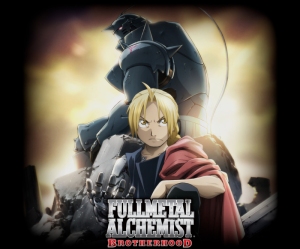 Summary: Alchemists study and perform the art of alchemical transmutation, manipulating objects and transforming one object into another. The basic law of alchemy is that in order to gain something you have to sacrifice something of the same value.

Edward Elric is the Fullmetal Alchemist. He and his brother Alphonse started life on a difficult track when their father left them at a young age and soon after, their mother died. Edward and Alphonse then broke one of the major rules of alchemy, which changed their lives from then on. Alphonse was going to die, but Edward was able to move Al’s soul into a suit of armor, costing Edward an arm and a leg…literally.

To get back what they have lost, the Elric brothers embark on a journey to find the Philosopher’s Stone that is said to amplify the powers of an alchemist enormously. They quickly learn of the dangers of Philosopher’s stones and how the country is in terrible danger.

The plot of Fullmetal is enough to keep you interested throughout the series. The story moves at a decent rate while focusing on several characters, not just the Elric brothers. All manner of alchemists get involved in the Elric’s search for the Philosopher’s Stone, which in turn puts everybody in danger. Political turmoil is also introduced as the anime progresses, adding another layer to the onion of plot. As if that weren’t enough, multiple countries join in the struggle for clarity on alchemy and its roots. Ishvalans and citizens of Xing join the fight, bringing new ideas to the table.

I feel like I should mention how much I connected with the characters. Whether they were good or evil, most of the characters added to the story in their own way. There was also a surprising amount of development for many of them, including the Elric brothers. I must say though, my favorite character was Alex Louis Armstrong, the Strongarm Alchemist. He was a lot of fun.

I appreciated the explanation of alchemy in Fullmetal, mainly the law of equivalent exchange, meaning to gain something an equal sacrifice has to be made. I also enjoyed how each alchemist possessed similarities in their use of alchemy, but each had their own unique abilities and strengths. Some alchemists excelled at flame alchemy while others excelled at manipulating the earth. I’ll give you one guess as to what the Fullmetal Alchemist excels at…

You might enjoy this if: You want to watch an epic adventure that includes a mixture of happiness and heartache. If you enjoyed Soul Eater or D.Gray-man, Fullmetal Alchemist: Brotherhood might be for you.

You might not like it if: You are afraid of commitment. At 64 episodes, Fullmetal will take a while to complete, especially if you get addicted and want to watch the original Fullmetal anime as well. There are also movies to watch as well!

(This AMV is pretty much spoiler free, especially if you haven’t watched the series) 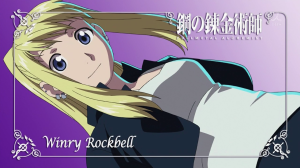