Fragglepuss Anime Review 94: To the Forest of Firefly Lights / Hotarubi no Mori e

To the Forest of Firefly Lights / Hotarubi no Mori e

Summary: Hotaru is a little girl who gets lost in an enchanted forest where apparitions and mountain spirits reside. An optimistic boy, Gin, appears before Hotaru, but if she touches him, he will disappear. Gin is always looking on the bright side of life, even though you would not know it by his face, which is covered by a mask. Hotarubi no Mori e follows Hotaru and Gin as time passes and she continues to visit him in the enchanted forest.

There are a lot of beautiful elements in this short film directed by Takahiro Omori. The first piece I noticed was the piano soundtrack, produced by Makoto Yoshimori. The music complemented the tone of the film from beginning to end. Another noteworthy piece of the film is the animation, which is set in a real location and animated with great detail. I found myself just starring at the backgrounds of the beautiful and peaceful nature scenes. The plot is fairly simple and there are not many characters introduced, but the film is interesting and retained my interest even though I am not overly fond of dramatic romances.

The only criticism I have about Hotarubi is the length of the film, which clocks in at a mere 45 minutes. The story is simple but unique in its own right and I feel the relationship between Hotaru and Gin could have developed longer, providing an even more meaningful climax at the end of the film. However, maybe I’m just biased because I enjoyed the film and wanted more of it.

You might enjoy this if: You are ready for a heartfelt short film that will take you on an emotional roller coaster in less than an hour.

You might not like it if: You are already in emotional despair and cannot handle more heartache.

Note to the Viewer: Both the manga and anime were set at the Kamishikimi Kumanoimasu Shrine in the Kumamoto Prefecture of Japan.

(Warning, the AMV contains spoilers. This one really does cover the entirety of the film. Watch the AMV after you have seen the film, you will appreciate it a lot more.) 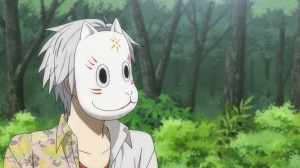