Posted on December 3, 2015 by Fragglepuss 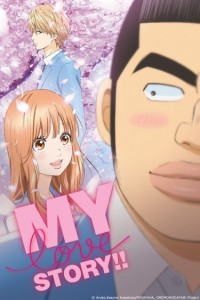 Summary: Gouda Takeo is a freshman in high school, but you would not know it by looking at him. Takeo has always been unusually large for his age, which has resulted in getting teased throughout his childhood. He spends his days with Sunakawa, his best friend that is popular with everyone, especially the girls. On a day like any other, on the train to school, Takeo saves Yamato from a pervert. Could this be the beginning of something new for Takeo?

My Love Story is a simple high school romance on the surface, but is so much more. The story follows Takeo and Yamato as they go through their high school career, getting to know each other quickly once they meet. It is refreshing to watch a high school romance anime where the main couple is aware they like each other and actually have a relationship with one another. It is too often in anime that the main characters are clueless to each other’s affections, frustration sets in after a few episodes, yet the characters continue their clueless behavior throughout several seasons. Takeo and Yamato are great because this is the first relationship for the both of them and they are both naïve in how to treat a relationship. We see the complexities of starting a relationship and the troubles that come up. It is fun to see the problems that arise, especially when it is an avoidable problem that only occurs due to a misunderstanding. The fun and light-hearted nature of this high school romance makes it easy to watch a bunch of episodes in a single sitting.

You might enjoy this if: You like your high school stories to be light with a dash of comedy and a sprinkle of sweet.

You might not like it if: You want a high school series full of drama, breakups, and teenage angst.

Note to the Viewer: If you want to play a game while watching, count how many times Takeo says in his head that he loves Yamato. Also, if you love the anime series, a live-action film adaptation was just released on October 31, 2015.

AMV – Feel the Flame by Xophilarus

(Warning, the AMV contains spoilers to some extent. It will just make you want to watch the show even more though!) 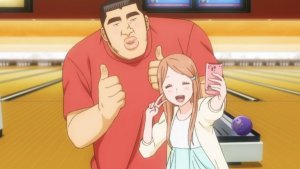