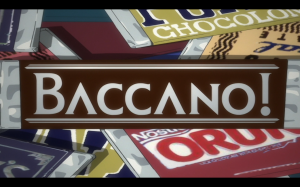 Summary: During the early 1930s in Chicago, the transcontinental train, Flying Pussyfoot, is starting its legendary journey that will turn into a bloody murder mystery. At the same time in New York, the scientist Szilard and his aide Ennis are looking for missing bottles of an immortality elixir. As if that is not enough, a war between mafia groups is getting worse. Also, on board the Advena Avis in 1711, alchemists are learning the price of immortality. Baccano! is based on the award-winning light novels of the same name. The events across different times and places, including many characters, initially seem unrelated but turn out to be part of a connected storyline. Merging all of these events together are Isaac and Miria, the most lovable and unlikely pair of thieves you will ever meet.

Baccano! feels like a story better fit to novels. The series bounces around between so many different characters and time periods at such a rapid rate that it leaves a trail of confusion as to what is happening in what year and if certain events are occurring before or after other events. By the time I had wrapped my head around it all, the series was practically over. If I watched the series for a second time, I feel like it would make a lot more sense. Baccano! Is similar to Durarara!. If you have seen Durarara!, imagine the wide variety of characters, add in frequent changing of time periods, and you pretty much have Baccano! The original novels of both series are written by the same author, Ryogo Narita. Even the opening of each series is strikingly similar, with each character being introduced and the previous episode being recapped all in the opening sequence. As a final note, the soundtrack was on point throughout Baccano!, providing a proper 1930s feel, and with music that would change based on the mood of the scene.

You might enjoy this if: You are ready for a lot of complexity in an anime that will require your full attention at all times.

Note to the Viewer: Pay attention to Isaac and Miria. They are so much fun to watch.