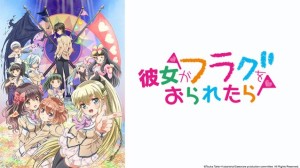 If Her Flag Breaks / Kanojo ga Flag wo Oraretara

Summary: Hatate Sota is a withdrawn high school boy who has an ability to visualize “flags” on top of people’s heads for future events such as death flag, friendship flag, and romance flag. The future is not set in stone though, as he is able to change the flags based on his interactions with the person. Despite the flag-viewing ability, he avoids making friends with others due to a trauma he experienced in a ship submergence accident. Beautiful girls get interested in his strange way of living, and in order to get closer to him and attempt to help him, they begin to live with him at the school dorm by force.

If Her Flag Breaks has an unique concept that leads to a lot of interesting situations and also a lot of comedy. It is funny because Hatate always knows more than everybody else due to his special ability, but he eventually gets called out by one of the girls because he stares at the top of people’s heads so often.

You might enjoy this if: You like really cute girls, especially if one of them is a robot.

Note to the Viewer: Although it is a comedy, If Her Flag Breaks can give the viewer more of an appreciation of how we all affect each others lives.