Posted on December 3, 2014 by Fragglepuss 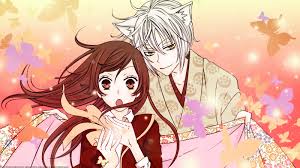 Summary: Nanami Momozono is a high school girl that just cannot catch a break. One fateful day her dead-beat father runs away because of his gambling debts and Nanami is evicted from her apartment. While wandering the city with no home, hope, or idea of what she will do next she runs into Mikage, a man stuck up in a tree because he is scared of a dog. Nanami saves him from the dog and her whole life changes.

In return for saving him, Mikage gives her a house, which of course she accepts. Little does she know this is no ordinary house, it is in fact a shrine. After arriving and meeting Onikiri and Kotetsu, who are the adorable keepers of the shrine, she meets Tomoe, the ruthless yet handsome fox familiar of Mikage. Tomoe informs Nanami that not only was she given a house, she was also given a mark that makes her a new deity. At first Nanami does not accept this role, but as time goes on she learns to love her new companions and her new role as the earth deity.

This is also where the romance genre comes into play, as Nanami starts falling in love with Tomoe. But in true manga fashion, Tomoe rejects the love because love between a human and a yokai is taboo. Despite all of that, Tomoe finds himself falling in love with her too.

You might enjoy this if: You appreciate a complex love story. It may not seem like it at first but as this manga progresses and you learn the back story of both Tomoe and Nanami you cannot help falling in love yourself.

You might not like it if: You do not like something lovey-dovey, or if you want a story that comes to a conclusion quickly. It takes quite a few volumes for the love story to really blossom.

Note to the Reader: If you were not impressed with the anime of Kamisama Kiss, you have to give the manga a shot. It is much better and is what made the anime one of my favorites of all time.