Posted on November 6, 2014 by Fragglepuss

Summary: New York, 1928. The economic prosperity brought forth after the Great War also brought forth a breach between the seals of Earth and Hell. The Magdalene Order is an organization that tries to counter this breach. Two of its exorcists are Rosette Christopher and her devil assistant, Chrono. Both appear out of place in an organization like this, with constant screw-ups and having to report to the head of the organization on a regular basis. There has to be something they can do to help restore the balance between good and evil.

You might enjoy this if: Religious anime and the Roaring 20s intrigue you.

Note to the Viewer: You will either love it or hate it.

SLC Anime reviewed Chrono Crusade this month. One positive mentioned about this anime was regarding the historical events that it portrayed. As a reminder, Chrono Crusade is set in the 1920s in New York. The writers took care to add historical events to this anime, and that was appreciated. To go along with that, the group found it interesting to see the Japanese take on Western culture and religion. Another positive was regarding the magic system in the anime. It was an intriguing system for some of the group. Lastly, the finale of the series was greatly seen as a positive by the group. I will not give it away, but it was the consensus that the ending was appropriate.

The main negative review was regarding the slow progression of the story. It was mentioned that the story could have been told in 12 episodes, but was instead extended to 24 episodes. That being said, for somebody that truly enjoys the story, the more episodes the better. However, the slow progression seemed to impact the group’s interest in the anime negatively. Another negative was regarding a lack of interest in many of the characters. There were many characters in the show, but many of them lacked development, being one dimensional throughout the series. Being a 24 episode series, there was plenty of time to develop and add backstory to the characters. By the end of the series, there were simply few characters that we were invested in.

There were mixed feelings regarding the use of religion in the series. Some group members found it to be overdone while others found the use of historical references in religion fascinating.

Overall, Chrono Crusade was fairly polarizing for the group. Some people enjoyed it while others did not enjoy it at all. 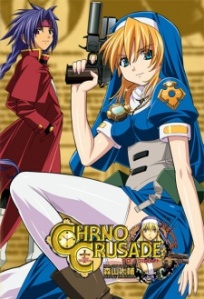