Posted on October 2, 2014 by Fragglepuss 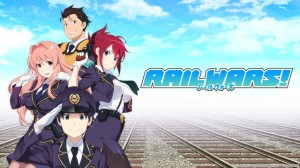 Summary: This rail story is set in a Japan that did not privatize its national railways. Naohito Takayama is a seemingly ordinary high school boy who dreams of a comfortable future working for the top-rated Japanese National Railways as a conductor. This guy loves trains so much. He is assigned as a trainee in the Railways Security Force full of people that he somewhat befriended in his training course.

You would not believe the amount of trouble that occurs on the rails. Takayama’s team has to deal with major problems on a regular basis, from foiling terrorist plots to being an idol’s bodyguard squad.

You might enjoy this if: You are not a rail worker yourself but appreciate the railway industry, or if you want to get to know what the rail system would be like in a parallel world.

You might not like it if: You want a more realistic picture of the rail industry in the actual world, or if you are looking for some of that drama.

Note to the Viewer: I know it is an anime about trains, but it is actually pretty exciting. Also, you would be surprised how often people are not wearing pants in this show, it’s crazy.